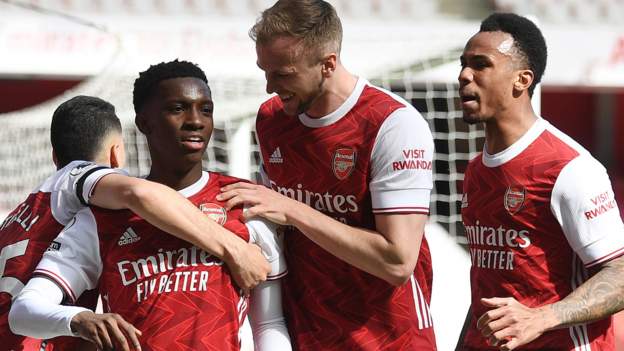 Nketiah rescued a point for the Gunners in the premier league as he got a last-minute goal against Fulham, the teenage striker promise to work hard and utilize his chance when he is called upon again.

Arsenal teenage striker Eddie Nketiah took his chance in the Premier league against Fulham to rescue a point for the Gunners.

The England under 21 striker grab a last minute goal at Emirate stadium after so many chance of finding the back of the net.

Nketiah who stated that it was great to score for Arsenal also said they fought very hard in the game to get a point they deserve.

“It’s great to get on the scoresheet and salvage a point for the team,” he told Arsenal Media after the game. “We fought very hard and we were very good at the tail end of the game, so I think it’s the least we deserved. It’s always nice to score for Arsenal.

“It feels good, to be fair. It’s a bit of belief, I think it’s the least we deserved, like I said. Of course we would’ve wanted the three points, but in the circumstances and how late it was, it has to be good to at least get a point.”

Nketiah could be utilized in future games by Arteta with Lacazette out due to injury and Aubameyang recovering from Malaria.

The teenager said he got a very good first half of the season and but he has not been called upon in recent weeks but claims he will work hard and utilize is chance when he is called upon again.