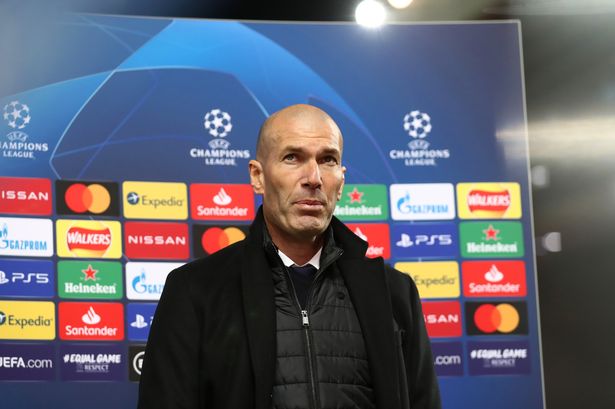 Zidane hails his team for their hard ahead of Champions League clash against Chelsea, and insist they have weapon that can counter the Blues.

Real Madrid head coach Zinedine Zidane hails his team for their hard work as they prepare to play Chelsea in the second leg of the Champions League.

Real Madrid played a 1-1 draw in the first leg of the competition as Benzema’s goal gives the Spanish giant a glimpse of hope in the second leg.

Read more: Manchester City through to final after victory over PSG.

Zidane in a press conference has stated that he his happy to make it this far and they will do anything to get to the final of the Champions League.

“I’ve got a good feeling” he said. “We’re happy to be involved in his game and we know what sort of match we’ll be in for. We’re ready and know what has got us this far.

“We’ll go out and play our game and give our all to make the final.  We’ve got this far thanks to our hard work and believing in what we do”

When asked if getting to the semifinal was a miracle the French man stated that: “It’s not a miracle that we’re here. We’ve got this far purely thanks to our hard work and believing in what we do.

“There’s no such thing as miracles in football.

“We’ve faced some challenges to get here, but you’ve got to take your hat off to this team because they’ve got character and personality and when the going gets tough, they deliver and always have done.

“We’re going to give our all tomorrow out there to get through to the final”.

He further stated that they are prepare for the Blues as they have weapons that can counter the strength of the London side.

“We’ve watched all of Chelsea’s game, but that doesn’t count for anything tomorrow because it’ll be a different game. We’re going to have to counter their strengths and quality. We too have our own weapons.”