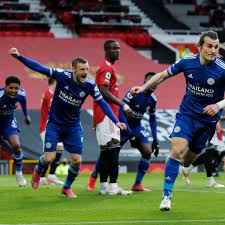 Leicester City beat Manchester United in the Premier League to secure Champions League spot as they return back to third position.

Leicester City beats Manchester United in the Premier League to secure top 4 as goals from Thomas and Soyuncu gave them the three points.

Leicester City who initially moved to third position after Chelsea victory over Manchester City have returned back to the position.

Manchester United start with a young squad captained by Matic but started with great motivation.

Leicester got the first goal in the game through Thomas but Mason Greenwood equalized few minutes in the first half.

The Foxes got the second of the game after Soyuncu headed in from a corner to give Brendan Rodger’s side the lead.

Ole Gunner Solskjaer brought on Marcus Rashford, Edinson Cavani and Bruno Fernandes but they couldn’t savage a point for their side.