As the season is coming to an end Arteta wants to make a positive change in his Arsenal side as he admit making tough decision to achieve that.

Arsenal manager Mikel Arteta is keen on making a positive change on his team as the season comes to an end.

The former Manchester City assistant manager has a tough season with his team and as fall out on the European competition next season.

“I want to reflect now, in the next week or so when we finish but I’m sure we’ve done a couple of things wrong, 100 per cent now I can tell you that now before going through it,” Arteta said. 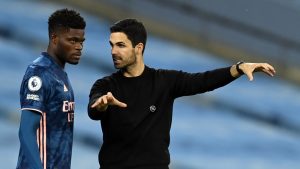 Arteta on identifying point of change.

“I have spent a lot of time and effort identifying critical points to change and then how those changes are going to be made, in which time frame we could do them and I want to spend time building, creating and with all the foundations that we have in place now, evolving the club and everything in the way that we want to do.

The Spaniard has outlined that Pre-season will be the starting point of making things right for next season.

Arteta, who claims he is a creative person have admit that he his determine to make tough decisions.

“I want a pre-season where we can work with the players and create. I’m a really creative person, I really want to create and evolve and a lot of the time since I’ve come here, I’ve been determined to make some very, very difficult decisions that I have to do.

“But I want to start doing more and more and more, because the capacity that we have to do it is incredible. I am so excited about that and I see that moment of a lot of change as a big opportunity for our future.