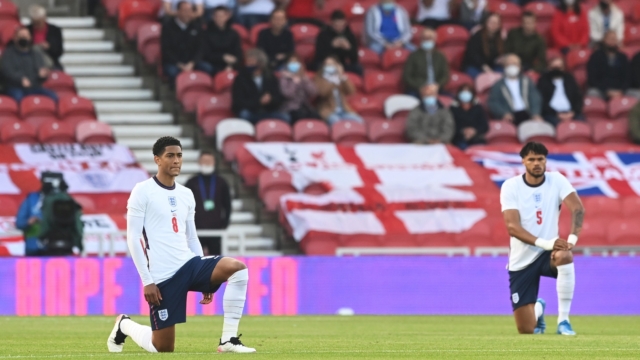 England head coach Gareth Southgate has stated that his team will not be discouraged as they are determined to always take a knee in the Euro 2020.

The England head coach Gareth Southgate has stated that the England team will not be discourage by supporters.

The team was booed by fans when they took the knee against Austria in the friendly match.

Southgate has stated that the England team is more determine to always take a knee to fight racism in the Euro 2020.

The England manager while speaking with the media ahead of the match against Romania on Sunday stated that: “We are collectively really disappointed that it happened.

“You have to put yourself in the shoes of an England player about to represent his country and because we are all trying to support the move for equality, the move for supporting our team-mates… some of the experiences they have been through in their lives.

“Some people decide to boo. I think those people should put themselves in the shoes of those young players and how that must feel.

“If that was their children, if they are old enough to have children, how would they feel about their kids being in that sort of situation.

“Most important thing for our players is to know we are totally united on it, we are totally committed to supporting each other, supporting the team. We feel more than ever determined to take the knee through this tournament.

“We accept that there might be an adverse reaction and we are just going to ignore that and move forward. The players are sick of talking about the consequences of should they, shouldn’t they. They have had enough really.”