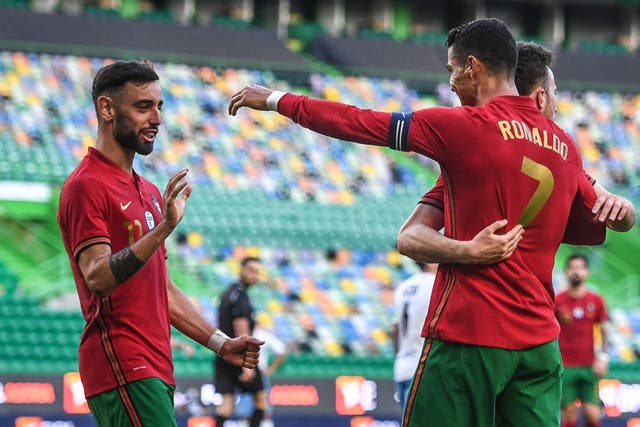 Portugal captain Cristiano Ronaldo has stated that the squad is not scared despite Joao Cancelo tested positive for Covid-19.

Portugal captain Cristiano Ronaldo says the squad is not worried about coronavirus after Joao Cancelo case.

The Portuguese right back Joao Cancelo has been isolated after he was infected with Covid-19.

Cancelo who has been isolated away from the squad has been replaced by Manchester United right back Diogo Dalot.

Ronaldo has stated that the team is not scared and are in peace despite the face that one of them tested positive.

“I don’t think it’s a key factor” Ronaldo said. “It’s a shame Joao tested positive but everyone in our team is at peace, we don’t talk about Covid-19 because we’re all tired of this.

“We know how to live with it and deal with it, it’s a sad situation but we’re all focused. For many players this is their first Euros and nothing will shake us.

“We respect all the rules but we’re just focused on playing, we’re not thinking about anything else at all.

“The crucial thing now is the Euros. It’s my fifth Euros but for me it’s like my first so I want to start on the right foot – we want to play a good match and have only good thoughts in our first match to our last.”

The Juventus player will once again lead his country side to the Euro tournament after they took it from France in 2016.

“It’s a nice record but I’m not thinking about it too much, winning the competition for a second consecutive time is a more beautiful objective,” he said.

“It’s obviously not the same team as in 2016, this is a much younger side with enormous potential. But how we do in the competition will tell us which team is better.”