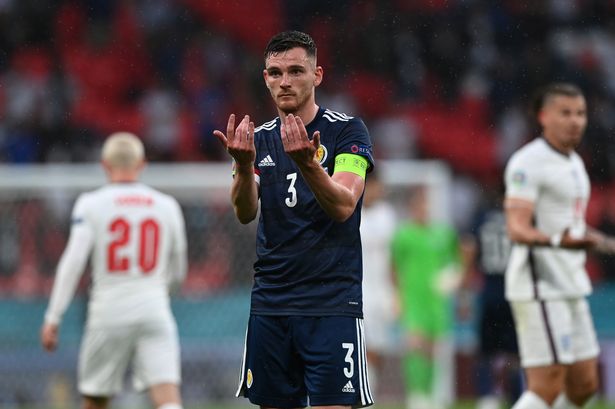 Scotland captain Andy Robertson says a point against England in the European competition has kept their hopes of qualification alive.

Scotland captain Andy Robertson says that a point against England keep their hopes alive in the European tournament.

The Scottish team were able to get a point from 2 game after a loss to Czech Republic in the first game and a goalless draw against England.

Robertson who stated that they did every thing at Wembley to get a win as they frustrated the England team in the game.

“I think we did [deserve to win], I don’t think many people can argue that. we had the big chances, at times we kept the ball superbly well, frustrated England and on another night could have come away with more.

The Skipper also talk about Glimour’s performance in the game and believe the 20 years old has got a bright future ahead of him.

“I’d put Gilmour’s performance right up there. Nothing phases him. I believe he can have as many caps as he wants for Scotland. He’s got a big future, but the here and now’s pretty good for him too.”