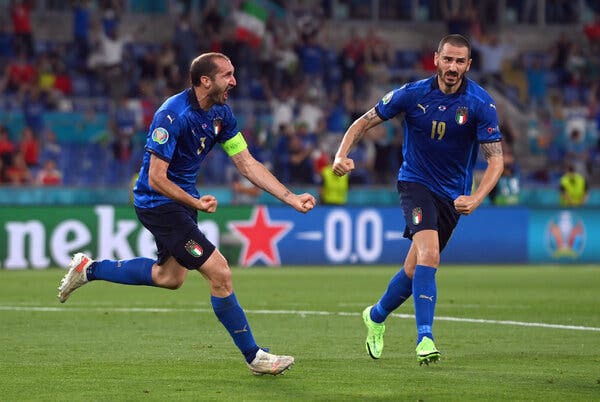 Italy captain Giorgio Chiellini admits to tough game against England as Bonucci claims they had a great feeling from day one they could lift the trophy.

Italy captain Giorgio Chiellini admits that the game against England was tough game for them in competition.

The Italy fell behind in the final of the European competition but fought back to score a leveler in the second half of the game.

The experienced defender insists they started the game in a worst way but got their rhythm back after 15 minutes of the game.

While speaking with the media Chiellini said: “It was a tough game, we started in the worst way possible, with England scoring after two minutes.

The fans, all of the stadium, gave their energy to England, but we were quiet and calm and then we started to lead the match from 15 minutes and started to play.

We found the right passes, controlled the game and that was the way to win. It’s a dream come true, it’s magic. We are more than happy.”

On the other hand, fellow defender Bonucci stated that they believed they can lift the trophy from day one.

He further stated that they had a great feeling and now they happy it has come to pass.

“We were special in that we believed right from day one when we all joined up. There was a different feeling in the air and it’s come to pass.

“It’s incredible how, day after day, we never got tired of spending time together.

“Normally, you can’t wait for something to end when it was so long, but we had this burning desire to carry on. It’s incredible.

“We [Bonucci and Chiellini] have been waiting for this moment from 2012. We were a step away, but we’ve been chasing after it. But we believed we could get it done.”