Manchester United boss Ole Gunner Solskjaer has plans to loan out Facundo Pellistri as he believes its for the youngster interest.

The Uruguayan scored the second goal for United against Derby County in the preseason game in an impressive second half performance. 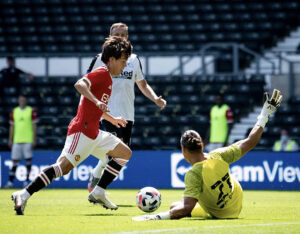 Pellisteri move to a Spanish team Alaves on loan last season where he impressed in the La Liga.

While speaking after the Derby County match Ole stated the plans he has for the young player.

“I can see a loan deal for him,” Solskjaer said.

“There’s been loads of interest and for his best interests as well, I think a loan will be what we look for.”

The United manager further praise Pellisteri for his performance against the Championship side.

“I thought he was bright, of course he takes his goal really well. First touch, good pass from Shola, but great first touch sets him up.

“I think he shows what he is, he’s a difficult player to play against. One against one he can go up past people and I’m very pleased with him.”