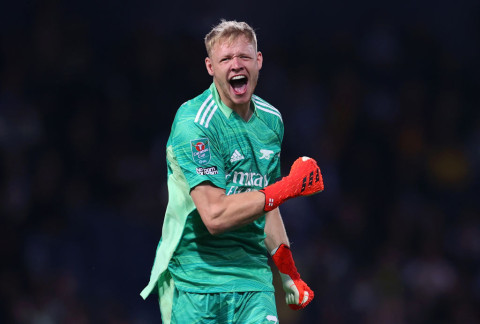 Aaron Ramsdale delighted to make his debut for Arsenal.

Arsenal new goalkeeper Aaron Ramsdale was delighted to make his debut against West Brom in the EFL.

The new signing pulls up three fine saves to give his new side a clean  sheet in the 6-0 win over the Championship side.

Speaking with the media on his debut and the team performance after the game Ramsdale stated that he didn’t expect the reception given to him.

“I wasn’t expecting the reception I got, so a big thanks to the fans for that”, Ramsdale said.

“A packed away end on a Wednesday night in the second round of the Carabao Cup shows the passion that the supports have and we put on a good performance for them. As debuts go, it’s one of the better ones.”

The former Shielfield United shoot stopper who admit he had minimal training section with the team before stepping in the middle of the sticks.

He further stated that he had to do what he has got to do in other to give Arsenal the clean sheet needed.

“I’ve had a few days of training with the team and I was happy, made some saves and did what I needed to do.

“I’m in goal and first of all, you [need to] keep the ball out of the back of the net, and that’s what I’ve done.”