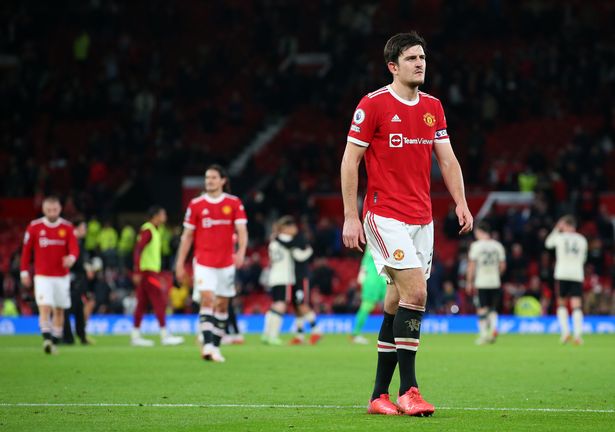 Harry Maguire apologises to fans and call on players to stick together after the heavy defeat to Liverpool.

Manchester United captain Harry Maguire has apologized to fans who left at half time of the game against Liverpool.

He also hailed the fans that stayed back to finish the game and also appreciated them for the song they sang.

“First and foremost, apologies to the fans. It’s nowhere near good enough for this club. We’re all disappointed,” Maguire said.

“They stuck with us even coming off the pitch at 5-0, they are singing and we appreciate that. But for us as a club, we have got to do better.

He added that the gave too many chances away to Liverpool but couldn’t utilize theirs.

“In the first half, it was too open… We gave them too many chances, they were really clinical and we had a lot of chances ourselves. But I’m a defender first and foremost and to concede four in a half of football, playing at Old Trafford for this football club, it’s nowhere near good enough.

Maguire further stated that he will be looking after his individual performance and call on players to stick together.

“As a player, I will be looking at myself, my individual performance and as a team, I am the captain of this club so I lead the boys. We have got to stick together. There is no point in blaming people, we have got to look at each other. We will go home tonight and look at ourselves in the mirror and think what you can do better.

“The group of lads in there, I look at them each day in training and they are doing everything they can and we are working as hard as possible, but at the moment, it’s not good enough. I keep coming back to that phrase, but that’s the only way I can put it.”